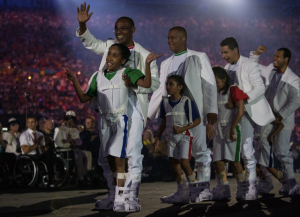 Writing is a difficult task on a timeline. I can appreciate the difficult job journalists have to do, almost always on a tight deadline. I have been mostly on the “critical” end of things when it comes to attributing quotes to me, and I also understand how difficult it can be to summarize a 35 minute telephone interview into two paragraphs as happen to me earlier this week in a National Post interview. I wish he could have taken a full page…NOT going to happen though!

Speaking of not telling the whole story, this is what I said on opening ceremonies day:

There is always tension between high performance sport and accessibility for all as a focal point. The concept of independence and universal design also come into play. I for one was somewhat uncomfortable with the children “marching in” carrying the flag strapped to an adult. There is nothing wrong with these children using a motorized wheelchair from my perspective.

Let me re-post the ONLY picture I have been able to find of this particular part of the ceremony as I know the featured image is rather small. 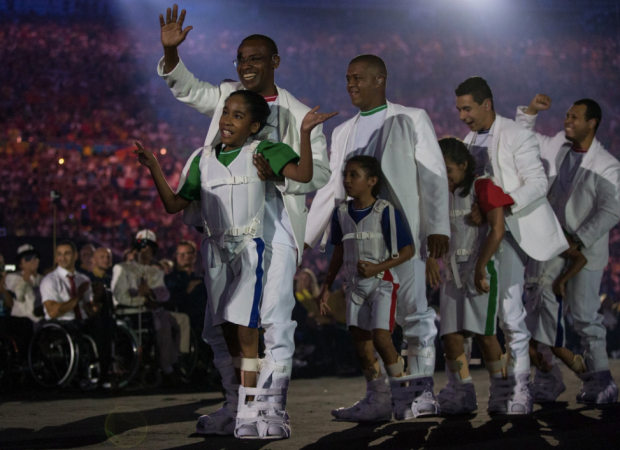 In London, I was in the TV booth describing the ceremonies, with a big book full of explanation of the imagery and symbolism of the event. No such luck when you are seated in the stadium.

Turns out that the story of these kids is that they are all from local favellas – the slums of Rio if you will, houses mostly of reclaimed concrete blocks, brick and sheet metal built up high on the the steep hills. One day a dad decided he wanted to take his child along for a walk and created a makeshift contraption to make it happen without having to carry him. Other parents liked it so much that the dad eventually showed others how to make them and even created a small business in the process.

These kids – and their dads, were all from local favellas, and needless to say they could never afford, nor use an electric mobility device in their neighbourhood. Not a bad story!