Indeed I have trying to see if I can beat my London record for viewership which was achieved when I talked about condoms in my blog. Yes hyperbole does sell as does sex.

But before I descend deep into useless knowledge, I want to point out that indeed romance can flourish at the games. I captured this lovely pick of Adam and Jamey – proud parents and proud paralympians – probably in that order, at our Canada Paralympic House last night. It does not need a caption.

To recap, the London story will make me chuckle for many, many more years. As Chef de Mission in London, I was allowed in the village earlier than most. To orient myself – and given that I am a physician – I walked to the medical clinic where the customary large bowl of condoms was present – yet untapped. An older lady who was volunteering at the clinic (I would peg her at about 75 years old) picked a pack of two and pointed out they came as a pair in silver or gold wrapping “you choose depending whether you want to come first or second” she said without moving an eyebrow. I did take me about 5 seconds to get it (call me slow) but I sure had a good laugh.

No bowl of condoms here. The organizers understood what I said in my London blog. Condoms are expensive, and if you can stuff a free year’s supply in your backpack, then why not? So they have machines this year, and you have to turn a little crank. I think one even has to get a token for it but I am not sure since I didn’t want one of my witty colleagues to take a picture of me carefully examining the condom machine and tweeting it! And don’t you know they are from natural amazon latex – sorry my allergic friends.

I’m not the only one trying to get more readership with sexy allusion. One site even came up with the “top 10 sexiest” paralympians, including our own flagbearer David Eng. The picture of David we have been using doesn’t give him justice, so I took the liberty of finding another one online that might explain the choice.

I hope my numbers get a boost – David, I’m counting on you! 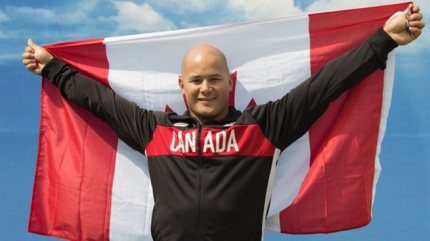