Day one in Sochi: Getting used to a new role 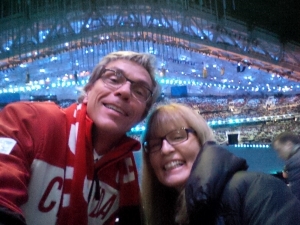 This is a new role for me – President, dignitary – call it what you want. It’s a strange feeling not being in the village at pre-opening getting everything ready for the athletes to compete. In fact, I pretty much arrived last, at 4AM the day of the opening ceremonies. And I’m wearing a suit and tie watching the athletes and mission staff walking from high up in the stadium.

Lots of Canadian families and friends of athletes in the plane from Istanbul to Sochi, a full flight in the dead of the night, yet more excitement than weary eyes. The locals are more than welcoming. Two young people whisk me away to a car on the way to the welcome centre (that’s where we get our official “accreditation” – the card you see hanging off the neck of everyone at the games). However, that’s not the car that was waiting for me so a couple of people think I have disappeared. We clear it all out later thanks to electronic communications! I apparently break the record for fastest from gate to room – under an hour.

From my room, I can see the mountains in the distance, and the Black Sea just a few hundred meters away. Again it’s strange to be in a hotel room and not in the village on a hard single bed. I do like the better bed though!

Best news of the day comes at 2PM when the Ukrainian delegation announces they are staying and competing for peace. We can finally put the whole boycott issue behind us. It was extremely frustrating trying to tell the story of our amazing athletes only to see the newscasters totally ignoring them and focusing on politics. Most of them had never written about the Paralympics or seen our athletes in competition. If they had, they would have understood that our Paralympians are all about sport.

Our athletes looked fabulous walking into the stadium – very stylish, energetic and enthusiastic! The Ukrainian delegation chose not to march, sending only the flag bearer. This was a powerful moment with a significant ovation from the people in attendance. And of course the biggest cheers were for the host team. I remember walking into the stadium leading the host delegation in Vancouver, and got a little chill just thinking about it. It’s a special moment.

Competition starts bright and early tomorrow. Hopefully all will be well. It’s been too warm at the hill and they had to cancel the downhill training run today. We shall see tomorrow.