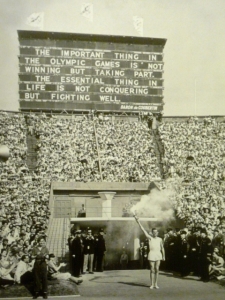 Ceremonies are over. I’m at the airport waiting for a flight that will definitely not leave on time. On the bus at 1:30AM but it looks like we won’t take off until 6:30AM now. Blogging keeps me awake and I felt I had some catching up to do!

A journalist asked me earlier today what really stuck with me at the games. I had to think about it for a while. It could have been the amazing growth in Paralympic Sport since I became involved, or how different it is to be a national paralympic committee president compared to my previous roles. In the end,  ideas kept coming back, all related to the unifying power of sport.

It is not a given. Sport can divide, and even cause people to hurt each other (as seen is some soccer matches around the world). But Paralympic sport is clearly different, and I hope it retains this quality as it grows and the stakes become increasingly larger for individuals and teams. Temporary disappointment turns to support, and grudges don’t last long – unless you’re a certain sledge hockey player from Norway. Exceptions confirm the rule someone once said.

There was really no sense of politics in the village. When I was still n Toronto, and our staff told me just that, I had a hard time believing them. But they were being truthful and observant – not blind. One US Sledge hockey athlete wrote that he was expecting a cold reception at the medal ceremony given his team had just beating the local favourites. But they got a loud ovation instead – maybe not as loud as the silver medalists, but not a boo was heard.

So now we go back home, rest and get healthy, and promptly start working towards Toronto2015, Rio 2016 and beyond. It hardly feels like work.