Months preparing yet is always like opening day sneaks up on me. There is so much to do to get everything ready to the athletes, their families and everyone else involved from dignitaries and sponsors to long time friends of the games, and a lot of it cannot be done until we land either at the village, the host hotel and the venues. So a scramble is almost unavoidable – controlled chaos if you will.
Canadian Paralympic Committee (CPC) staff have set up at the hotel right after the long week-end. For me, after spending the week-end away with family away from a cell phone signal, there is a little catch up to do. OK, that’s not technically correct – I could get one bar out of five if I walked past the outhouse and through the moss field up the rocks and spun around three times (I made up the last part but I did move around that rock outcrop quite a bit looking for a signal).

I start packing – and it’s truly strange to pack for 12 days and go to a hotel 15 minutes away from your house.  But I run out of energy an go to bed only to wake up feeling the pressure of the task awaiting. So in a cab I go at 4AM to check in at the hotel.  My wife later tells me the cabbie likely thought we had a big fight and I was being kicked out of the house. I probably looked the part given I hadn’t slept much! But luckily I have two big red suitcases that say CANADA on them and the cabbie says “you must be going to the Sheraton” and he’s right. He’s driven a few others there though the week-end and knows that’s where people with large suitcases adorned with their national flag are going.

I unpack my suitcases as the sun rises. This will be my view for the rest of the games. It’s quiet now, but won’t be for very long. In fact, Nathan Phillips Square is packed with people attending the free concerts every night. Up to 14,000 people I am told and from my perch, I have no idea how they all get out of there after the concert in orderly fashion. But they seem to do it every night – right at 11PM. There is a certain routine establishing itself here. The concert finishes at 10:50PM and then the Games theme song goes on with a spectacular display of fireworks every night. So no going to bed before 11PM on the North side of the hotel! I even worry about the kids in the room next to me – they’re getting pretty loud and agitated. I hope for their parents that they settled in. I have not idea – I’m sound asleep by 11:05. 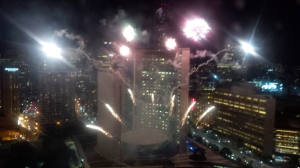 Like Loading...
From: Toronto2015
← It’s a Wrap!
Welcome to the Changing of the Guard! →
No comments yet