The Beaches of Rio

More sport to come AND a cultural interlude.

Ask for the name of a beach or neighbourhood in Rio, and most people will likely say “Copacabana” and indeed that was the only known place prior to 1964. Copa is indeed a superb beach and a hub of activity in Rio.

It’s also the place where you can use a hidden money belt because the crowds and activity make it a heaven for pickpockets. The whole “Rio is unsafe” discourse is mostly centered around Copa. Nonetheless, it was the perfect backdrop for the first Paralympic triathlon, one in which Canadian Stefan Daniel won silver at the age of 19, reeling in 2 competitors during the run and only coming short of the favourite from Germany.

Competitors started from a platform at sea and swam to the transition area to hop on a bike – some literally given the physical impairments at play. The transition area is quite the sight, some hop out of the water on one leg and put on their cycling prosthesis, other try to put on their shoes as fast as they can while pushing their bike along using one arm.

The backdrop is Fort Copacabana and on the other side is a different beach and neighbourhood – with the featured image as the clue of its name. That would be a good question for a quiz show: “What’s the relation between this young woman and the Games mascots?”

Our Canada Paralympic House is on Barra beach, a long crescent of beach lined by a boulevard, stone walking path and paved bicycle patch that goes for about 10 kilometers. My hotel room look over a service roof but from the 17th floor terrace, you can get a sense of the beach which I featured in an earlier blog. 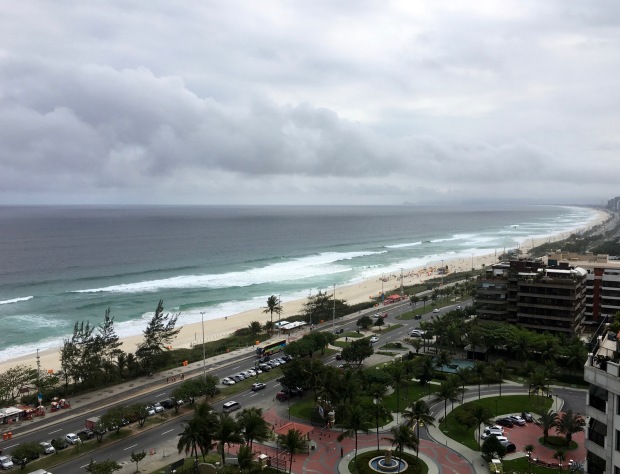 In between Copacabana and Barra is Ipanema, and the featured image is the iconic “Girl from Ipanema” who inspired the authors of the 1964 Grammy winner. As an aside, the “Best New Artist” of 1964 were the Beatles, and they didn’t win the Grammy for best song.

The song itself was written in 1962 and it isn’t until later that the idea came to translate it into English. The only person who could actually speak English in the studio at that time was the producer’s wife who was not trained as a performer but as many have said nailed it by letting the song speak for itself. Astrud Gilberto & Stan Getz ◊ The Girl From Ipanema ◊ 1964 later reprised by many including Frank Sinatra Frank Sinatra – The Girl form Ipanema

It’s worth watching the video not only for the songs but also for “not so distant” memory of what was deemed appropriate in the past. I for one don’t miss performers smoking on stage!

And the link to the Games? The Olympic and Paralympic mascots were named Vinicius and Tom after the song’s co-writers gathering 44% of a vote of Rio citizens.