So much to say, so little time!

I need to get to the semi final hockey game very soon. I thought I’d have a couple of hours this afternoon to blog, but was invited to an official lunch. Pleasant bus ride to Sochi proper (the Paralympic village is really in the nearby town of Adler). Sochi has so many new buildings, it is unreal. It’s very lush, much more so than Adler yet it’s very close and they are both on the coast. However, we were brought to a grandiose old house (I am told it once belonged to Stalin) for lunch. I stopped counting the courses at 9 (I think…). Didn’t make it back to the hotel until 5PM.

The picture at the top is the setup as we arrived. They actually had to bring us more utensils if you can believe it. The first course was “some kind of vegetable with some kind of jelly”. In fact, I did not recognize most of what I ate but it was delicious. We had caviar on small pancakes. the caviar arrived in its own real ice igloo with the Paralympic logo encrusted. We had quite a bit of fun at the table trying to figure out how we were supposed to eat it and what condiments went with it. We didn’t need a menu, we needed an instruction manual.

Two more appetizers then soup, then a main course (I had the salmon but the option was veal cheeks) but before that, we had a sorbet which was inside a thin ice fruit replica which was gently cracked with two spoons by the waiters so we could spoon it. Then came desert #1 – so kind of flan, followed by a chocolate desert, also served in a chocolate capsule and covered with warm chocolate sauce.

I sat with colleagues from Belgium, the Netherlands, Australia and South Africa and we just kept chuckling with every new dish that was served. And of course, we had live music including some artists that had been brought from the Bolchoy. Never had a lunch like this, likely will never have another one either!

Lastly, the Russian wines were actually quite good!

Those who know me also know I eat a bowl of soup for lunch so I can stay awake in the afternoon and be productive at work. Yes I did sleep the whole way back on the bus. 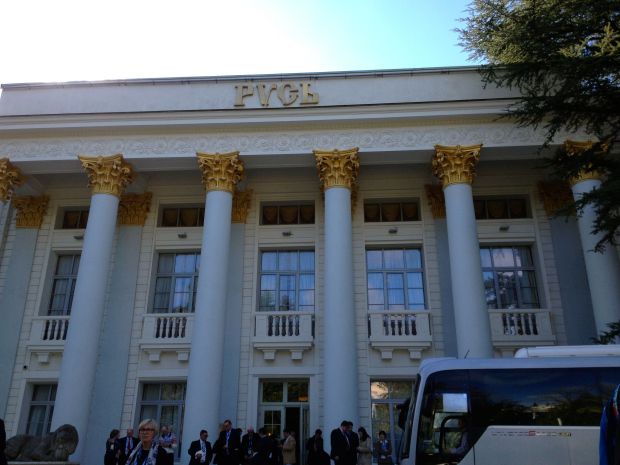