Welcome to the Changing of the Guard!

I have been involved in a lot of roles at the Games and can appreciate that each of these roles call for a somewhat different skill set. I’m not sure one ever has every skill required, that’s why we try to build teams of complementary people. It became obvious early on when at the Sydney Paralympic Games a visually impaired athletes with a rare eye disease walked in the clinic leaving me rather baffled. But at least I knew who to ask for help and we did just fine.

For a team doctor, one would have to be an ER doc, a family physician, a physiatrist, an orthopaedic surgeon and maybe a psychiatrist – and I don’t know anyone who can do it all. But we always try to find leaders with a large variety of skills and who can relate to all aspects of the role.

When it came to the Chef de Mission role, I always felt I was missing something important – the athlete’s experience. I have trained hard in my days, but medical school and residency always took precedence over any aspiration of elite sport – not to mention somewhat suspect tendons that constantly got in the way… So there it was, I could never really relate to the athletes in the same visceral way a former Paralympian could.

The Canadian Olympic Committee was clearly ahead of us in this respect. My counterpart in London – Mark Tewkesbury is an outspoken advocate of sport and of people of all abilities. He gave me good advice – but in a way it was almost like teaching me how to push a baby out – he had something I would never really know about to base his experience on.

In London as Chef de Mission, I was determined to work myself out of a job. I often say I became hooked on Paralympic sport beside the pool in Sydney, so it was fitting that my assistant Chef de Mission be a former Paralympic gold medallist. Lis Walker-Young was everything I wasn’t  – an athlete, a woman, youthful and good looking – so we were the perfect team! And you could see in her eyes how much sport meant to her the first time we visited the competition pool in London.

Now we’re in Toronto and the changing of the guard is complete. Lis is the Chef and her assistant Stephanie Dixon – winner of 19 Paralympic medals – is the assistant. And they’re just rocking it. Not figuratively, you might have seen them take the stadium by storm and inspiring not only their team but the whole nation. And yes they do have to tolerate getting pictures taken with the occasional old guy. 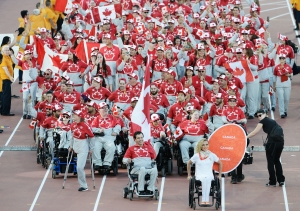 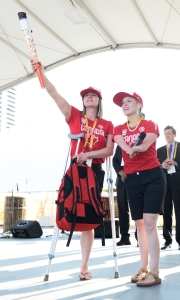 And while I’m at it, a bit thank you to Curt Harnett who did a phenomenal job as Chef de Mission for the Pan Am Games. I’ve heard the mention of “best Chef de Mission ever” and that might very well be true. And I do consider him a true friend of the Paralympic movement. He always included us and made our athletes feel part of the team the entire time. He clearly has something I never possessed – and I don’t only mean thigh muscles! 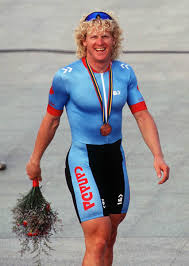 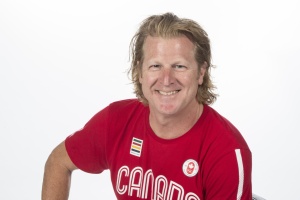 Like Loading...
From: Uncategorized
← Viva Parapan Am Games!
Many journalists love our athletes, many others love controversy →
No comments yet